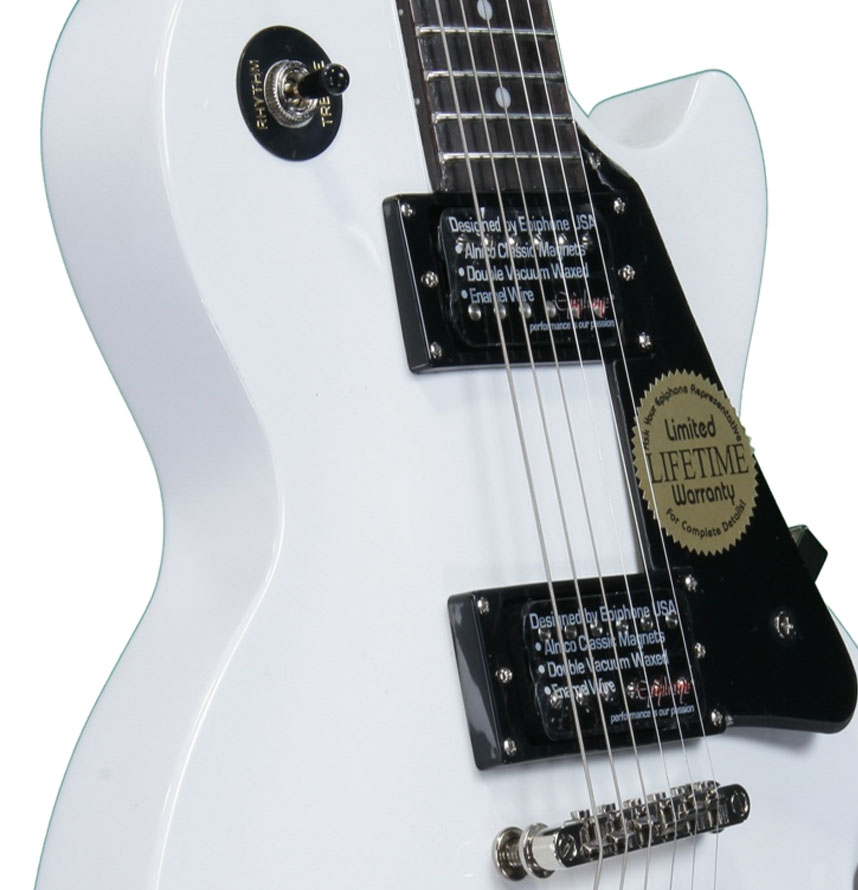 If you study the guitar, you’ll discover the process of acquiring a new instrument to be a very exciting and perhaps confusion at the same time. Taking some time to learn more about your prospective investment will enable you to make a more educated decision which could save you money and give you a stronger perspective for a better purchase. Should you be taking guitar lessons, always ask your instructor for his or her perspective; knowledge is power!

Two of the most iconic electric solid body guitars (constructed with a body made of one or several solid pieces of wood as opposed to a hollow or semi-hollow bodied guitar, who’s wooden body is chambered) are are unquestionably the Fender Stratocaster, discussed in an earlier blog and this week’s subject, the Gibson Les Paul. Hot on the trail left by the creation of the first commercially made, solid body electric guitar, Leo Fender’s Telecaster, 1952 saw the Gibson Instrument Company blessed with the endorsement of guitarist and electronic wizard, Les Paul under who’s namesake bannered a groundbreaking new instrument. Originally constructed with P-90 pickups, which have a relatively bright and clear tone, Les Paul pickups were replaced in 1957 by humbucker pickups, also called PAF (patent applied for) which yielded a fatter and warmer sound. Having a richer sound than the P-90s, they also offered a warmer and less treble-oriented tone than the popular Fender guitars of the time.
Humbucker pickup

The first models were called Gold Top due to finish of the guitar. There were phased out in the late 1950’s to be replaced by the characteristic sunburst finish, so well loved these days. Those original Gold Top models have gone on to become collector instruments all over the world. Of course, as everything old becomes new again, the Gold Top model has been in reissue for many years now.

*****(Found on Ebay:)*****
Stylistically, this classic and well-loved instrument can be found in every kind of musical style utilizing an electric guitar. Although endowed with the ability to cut through and scream on Blues or Rock solos, the Les Paul has an innately thicker and creamier sound than its Fender cousins. Think Jessica by the Allman Brothers.

Below are a few video clips to give you more perspective.

Very cool clip of Jimmy Page playing a Les Paul on Ramble On:

Dickie Betts wails with a Gibson Les Paul God Top on the classic, Jessica with the Allman Bros., circa 1982:

This beautiful and visually aesthetic instrument has taken many forms over the years, from the more economical Junior and Special to the Standard and Custom models, you can find a Les Paul in one, two and three pickup formats and in every possible color and variation you could imagine. Gibson’s owned second tier company, Epiphone makes similar and more affordable models, should your eyes be bigger than your wallet. In addition, many other guitar companies make Les Paul type of models as well. Take a very good look around before you make a final decision. Also, you can always upgrade the pickups and achieve a better model and sound than you can even imagine for an additional few hundred bucks.

There has never been a better time to play guitar and learn guitar. Take your time, search to find the right guitar instructor or guitar teacher for you and always ask questions of then or one with experience when it comes time to buy a new guitar.