Philadelphia Guitar Lessons: How to Select an Electric Guitar Part 4

If you want to take guitar lessons in Philadelphia with a qualified guitar teacher, and at the same time learn about guitars and how to buy them, then you’ve landed on the right page!

This is Part 4 in the continuing series, How to Select an Electric Guitar.

With such a huge selection of electric guitars on the market today, I’ve been simplifying  our options and search by breaking them down to three or four basic genres, Fender-style, Gibson-style, hybrid or variation of instruments made by other companies and a category I’ll title “other” for now.

We’ve been looking at some models created by the Fender Guitar Company. Over the past two installments we’ve looked at Fender’s flagships and most iconic models: the Telecaster and Stratocaster, respectively. When it comes to Fender electrics instruments, students coming to study guitar with me most commonly have a Strat, less so, but still a very cool instrument, a Tete. Not to influence your decision, as your choice should be based upon whatever instrument resonates (pardon the pun) the most for you personally.

Fender has a huge line of guitars, one of the largest in the world, probably second to Gibson. The company has created numerous models in addition to Strats and Teles, which have not quite achieved the same success or popularity, however are certainly well worth mentioning. Today we’ll be checking out a few of them which are in production today.

An interesting but somewhat enigmatic guitar created by Leo Fender in 1958. Similar in visual vibe to the Stratocaster notwithstanding its two shallow cutaways, this axe was created with two larger pickups for a warmer and more jazz-like tone. It was also the first Fender guitar created with a rosewood fretboard, a wood yielding a darker and less biting tone than the standard of its maple brethren.

The Jazzmaster was aimed at and created for elite Jazz players, but missed the mark due to it’s complex switching system and less than perfect vibrato system. These same characteristics also disaffected serious players in the Rock community as well. Nonetheless, it came to prominence in the music of the Ventures in the late 1950’s/early 1960’s.

Bob Bogle of the Ventures, second from the right, can be seen playing one in the video below:

With the decline in popularity of surf music and the rise in prominence of British, Blues and Rock, the Jazzmaster could be purchased for a pittance. Becoming attractive to US punk bands in the 70’s and 80’s, it was heralded by Elvis Costello. Other players include: Nels Cline of Wilco, Ric Ocasek of the Cars, and J. Mascis of Danseur Jr.

Elvis Costello expresses his affinity for the instrument: 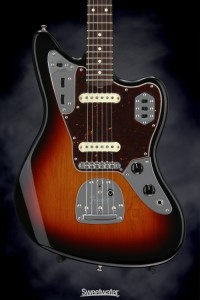 Showing up four years later in 1962, the Jaguar was smaller in scale, Leo’s hope of attracting Gibson enthusiasts and had a similar visual body design as it’s sister, the Jazzmaster; again with shallow cut-aways and curvy body bottom. This instrument had hotter (more powerful) pickups than the Strat and a string dampener, although guitarists frequently enjoy using their own hands for this function when playing to create muted and funky sounds. This guitar employed a more sophisticated pick up switching system than the Jazzmaster, which probably did not help to fire up its popularity among players.

Some enthusiasts include: the Beach Boy’s Carl Wilson and players in the bands Placebo and Sonic Youth.

Some of the best known players have been Kurt Cobain and John Frusciante:

Playing and learning how to play music and the guitar is all about expressing oneself. The many different guitars created by the Fender company enable an individual to discover their own creative voice and have fun through this endeavor!

In my new installment we’ll look at two additional Fender models. After that, onto Gibson guitars…have a great week!

If you’re in the Philadelphia area and want to learn guitar, David Joel is simply the best choice for a Philly guitar teacher.

Call David Joel to see if there are current openings for new students.