Philadelphia Guitar Lessons: How to Select an Electric Guitar Part 2

Sometimes, it’s not about the guitar lessons, but about learning to select the perfect guitar for you!

In keeping simple the purchase of a new electric guitar, over this series of articles I will break our options down into a few categories: first by two of the major guitar companies in the world, Fender and Gibson and their respective instruments. We’ll then we’ll look at some additional manufacturers and their contributions to this field, while keeping in mind the Fender and Gibson guitars we’ve already visited. In this installment, we’ll be looking at the Telecaster created by Fender.

Fender guitars (one of the best-known manufacturers) most commonly have engineered their instruments with a maple neck and fretboard or maple neck and rosewood fretboard. Maple has a brighter and snappier sound while rosewood a thicker and warmer. Body woods, often more varied and longer in list include: alder, ash, maple, mahogany. I’ll discuss these in more detail in a later blog.

The world’s first successfully mass produced solid body guitar (a non-chambered instrument made of a “solid” piece of wood) was offered to the world by innovator and businessman Leo Fender in 1951. The name Telecaster was modified from its original name, the Broadcaster, which was abandoned at the request of a drum company called Gretch, due to a trap kit created earlier under the same name. With television being the new rave of the early 1950’s, Don Randall, Fender’s In-charge of marketing, juxtaposed the name of the new entertainment concept and Broadcaster to create the term Telecaster. 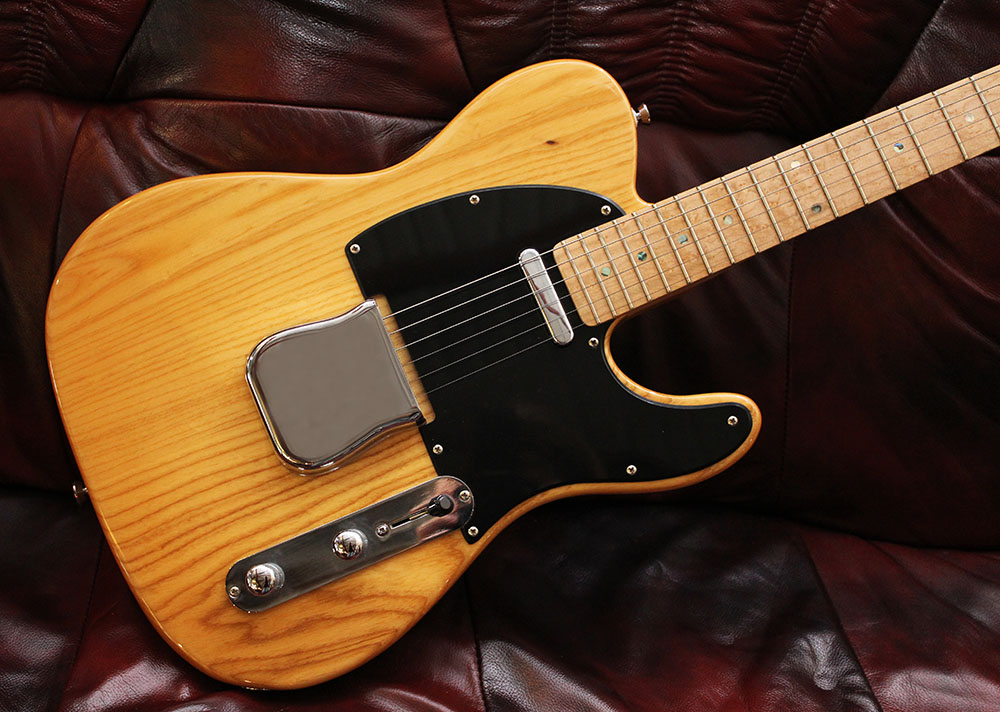 Characteristic to this guitar are its unique single cutaway, headstock shape and volume and tone knob plate ensemble. Traditionally, Telecasters are constructed with two single coil pickups (the guitar equivalent of a vocal microphone and the means by which the guitar transmits its sound electronically to an amplifier), of which one which is lipstick shaped and located just below the neck of the guitar, mid the pick guard. The other is angled, larger and located in the bridge (the metal plate mid the body just below the pick guard).

Telecasters can come in a variation of pickup configurations including those with double coil or “Humbucker” pickups. As in the verbal description, double coil pickups coils two pickups together. These then reduce the unwanted noise or hum which single coils traditionally create. The result is a fatter and warmer as well as a quieter sound. As you may know, these instruments come in a multitude of colors and styles, body types – it’s really all about how you would like to express yourself in an instrument!

A very stable and hardy guitar, the Telecaster is most commonly known for its “twang” and bite. Used frequently in Country music by artists such as James Burton and Brad Paisley, many other great players including Jerry Reed and Chet Atkins have shared their gifts via this formidable instrument.


The Telecaster has probably been used in every form and style of electric guitar music created. Jimmy Page, most well known for his use of Gibson Les Pauls, played a Fender telecaster on the first Led Zeppelin album.


Danny Gatton, one of my favorites, employed the Telecaster as his most well-played instrument.


Other well know players on this axe include: Steve Cropper, Roy Buchanan, Bruce Springsteen, Chrissie Hynde, Mike Stern, Albert Collins, Andy Summers and Susan Tedeschi. There are many, many others…

Venture forth to your local guitar store, ask your guitar teacher or a friend with guitar experience, check out various players and Telecasters on the internet and see if this is the instrument for you. You can find them in price from a Fender Squire Telecaster for $200, to a vintage model for tens of thousands of dollars. If it’s your first electric, I would recommend purchasing perhaps a Mexican model for $400 up to perhaps an American model for $1,000. Become educated, find a model you enjoy and take your time shopping. Most importantly, have fun!

Think of purchasing your first electric guitar or a second electric guitar as a reward for all those hours of practicing your guitar lessons. You can use the idea of a “dream guitar” as a motivating factor when learning. Reward  yourself when you get to the next level of learning.

Next week we’ll be checking out the Fender Stratocaster. Until then…

David Joel is a highly qualified guitar teacher in Philadelphia. If you are thinking about taking guitar lessons, you will learn from the best.