Philadelphia Guitar Lessons: How to Select an Electric Guitar Part 3 – The Stratocaster

Philadelphia Guitar Lessons isn’t only about teaching music. It’s also about guiding you in every aspect from how to select the right guitar to the best music shops in Philly. Your musical journey begins with PhiladelphiaGuitarLessons.com! 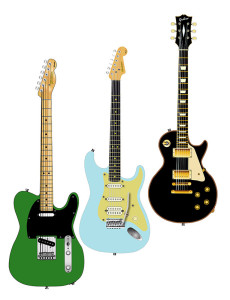 What kinds of electric guitar sounds do you love and what sounds would you like to create yourself? What comes to mind when thinking about the searing sounds of a delicious and fiery guitar lick? One of the first images you may be the Stratocaster. Although production occurred in 1954, three years following his creation of the Telecaster, Leo Fender’s Stratocaster, has probably become the most iconic electric guitar known to our planet. Certainly the most copied design today, there are probably thousands of variations of Leo’s original instrument.

Despite speculation regarding the derivation of the name of this instrument, A.R. Duchossoir in his book, the Stratocaster states “…..it is assumed that the name was later coined by Leo Fender himself as a blend between a sort of space-age “stratospheric” appeal and the catchy “caster”suffix used on the Telecaster.”

A solid-body guitar in construction (a non-chambered instrument, unlike an acoustic, hollow-bodied jazz or semi-acoustic electric guitar), this remarkable instrument has two cutaways (hornlike structures borne on each side of the neck) with a beveled body for ease and comfort in holding the instrument, either sitting or standing. Strats are standardly equipped with three single coiled pickups (planted on the pick guard plate), which some years after its inception, were reengineered to be able to be played in different combinations with each other. Unique and fantastic in sound, these additional tonal options adjusted by a toggle switch, enabled the instrument to bypass the buzz or noise traditionally generated by single coil pickups. The headstock of this guitar has its own original design with six tuners placed on the top side of the head (if you are holding/playing the instrument). Original and characteristic are the input jack and vibrato system created specifically for this instrument alone.

The Stratocaster has a marvelous tone for Rock, Blues, Country, Funk and just about every style you could think of. Though not traditionally known for a Jazz tone, with the right adjustments in tone/eq on the instrument or amplifier you may be able to create a sound comparable for your needs. This guitar guitar can scream and also play very gentle and delicate tones. A quite amazing invention!

Song writer and performer Buddy Holly influenced the Beatles, Bob Dylan, the Rolling Stones and musical generations to follow. This tv performance from 1957 shows a passionate Holly performing with his Stratocaster less than two years before his untimely death:

One of the most iconic players who, although not exclusively, but most frequently played a Strat was Jimi Hendrix. The Woodstock performance below exemplifies and assisted to establish the importance of this instrument:

Bonnie Raitt is a fabulous song writer and plays a mean slide guitar. Her guitar of choice, well you guessed it:

There are many different models and variations of the Stratocaster made by Fender alone. The American Standard Stratocaster is probably one of the holy grails of guitars. They are an upscale of their sister model, The Standard Stratocaster which is made in Mexico. Perhaps the biggest difference is a higher quality set of electronics. Nonetheless the Mexican made models are quite good. There are also Signature models, created to the specs of artists who upgraded and altered their own instruments.

You can always upgrade your instrument with a new set of of pickups, tuners and a bone nut. An inexpensive option is the Squire Stratocaster, created by a subsidiary company of Fender in Asia. Though not quite as high a grade of instrument, these guitars will provide years of enjoyment for those looking to journey to the joy experienced when one plays guitar in their own “Guitarland.”

Look at reviews, check out the different options available, there are so many these days. If you’re one of my students or are thinking about taking guitar lessons with me, I will set aside some time and help you pick out the perfect guitar. I’m certain with some study and knowledge gained, you will be well on your way to picking out a Stratocaster you will fall in love with!

David Joel is a Philadelphia Guitar Teacher whose qualifications are  impeccable. If you are thinking about taking guitar lessons, you will learn from the best.