Philadelphia Guitar Lessons: How to Select an Electric Guitar Part 5

Fender: The Mustang and Starcaster

Whether you’re learning to play guitar in one-on-one guitar lessons, a guitar class, trying to figure to out on your own through online guitar lessons, or you plan to study guitar with your friends, it’s important to have the right gear. Over the past four blogs I discussed the purchasing of an electric guitar and four of the most salient (outstanding) or best known Fender electrics. Today we’ll conclude with the Mustang and Starcaster. 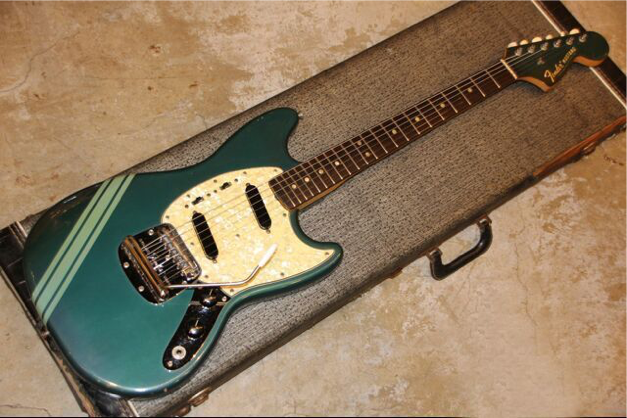 Originally conceived as a student model to win the loyalty of younger players, hopefully for a lifetime, Fender launched the Mustang in 1964. Similar in construction to the Jazzmaster, Jaguar, with it’s two horns, the Fender Mustang featured a forearm contour in the body, a nod in the direction of the more aspired and professional Stratocaster. Shortened in scale to (24”) from the full-sized Strat (25.5”) and armed with two single-coil pickups like the Jaguar and its predecessor, the Duo-Sonic, this instrument featured a three-way position switch for each of its pickups (on/off and two tone presets) and master volume, tone knob and input jack constructed on a metal pick guard extension. The Mustang was originally produced in individual colors: red, white and blue. As production and upgrades continued additional colors were used. Pearl pickguards are common for many of the models.

Between its standard sonorous Fender bright tones and in the case of this model, inclusive of funky “hollow” sounds, the Mustang received its endorsement from some top players, the most notable and probably most often seen the this axe was Kurt Cobain. Other notable players include:

The clip below features Nora Jones sporting a red Mustang:

This is a Modern Player Mustang:

Attempting to earn it’s corner of the market a la Gibson’s 335-type guitars, Fender created the Cornado in 1966. Three years after its failure in 1972, Fender built from its ashes the Starcaster in 1975. Like most Fender guitars with offset body and characteristic funky, slender appeal this guitar, along with Humbucker pickups (double coil producing a fetter and bigger tone, used in many Gibson guitars) and a semi hollowed chambered body was set this guitar apart from its Fender brethren. With a thinner sound than its competitors 335, the Starcaster sounded more like a fat Telecaster. Out of character for Fender, a semi-hollow guitar in its line of instruments did not sell and was discontinued in the early 1980’s.

Proponents of its cause include Radiohead’s Johnny Greenwood, Dave Keuning of The Killers and players from Death Cab for Cutie.

Below we hear Jonny Greenwood playing a Starcaster:

Everything turns around in time. For those who enjoy retro becoming modern, a few years ago Fender reissued the Starcaster and its predecessor, the Cornado. Now you may enjoy new models of these very different style Fender instruments.

I’ve included a very interesting documentary about Fender that I know you’ll enjoy.

Anyone playing or wanting to learn how to play guitar should have the tools of knowing how to select the right instrument for their own purposes and enjoyment. There’s the technical side where one learns to study guitar, if through the formality of a Philadelphia guitar teacher or on one’s own, then there’s the branch of knowledge associated with knowing about one’s instrument. Both need to be well understood to become a great guitarist. In my next installments on purchasing an electric guitar we’ll be looking at Gibson models! Keep learning, playing and working it out and as always, make it fun!

David Joel is a guitar teach in Philadelphia. His approach to music and teaching guitar keep him in high demand. If you live in Philadelphia or a neighboring town and want to learn guitar from a qualified guitar teacher, then call or fill out the form below to connect to David.